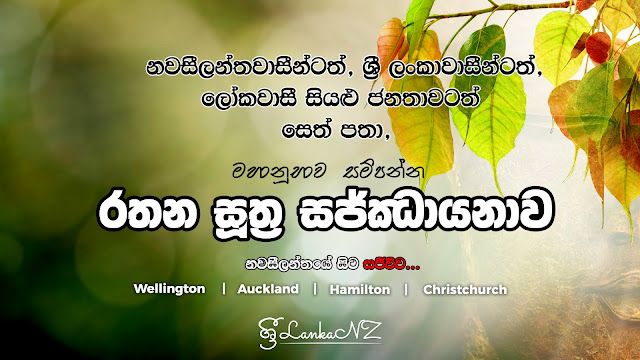 At a time when not only New Zealand but also the whole world is ravaged by the Corona Virus plague, it is timely to have been blessed by the compassionate words of the Lord Buddha. It is believed that the sonorous sounds of chanting soothe the nervous system, purify the blood, and produce peace and tranquility of mind, and bringing about the harmony of the physical state.
Today, we are so fortunate to have those words preserved in its unblemished version in Pali language and to be able to hear through the monks of the Buddhist tradition, in a powerful chanting format.
ශ්‍රී LankaNZ  community paper initiated at this point in time to broadcast live through our YouTube channel as we are all following the social distancing .The Monks from four monasteries of Theravada tradition in New Zealand namely,
Srilankaramaya , Auckland
Waikato Compassion Meditation Center, Hamilton
Dhamma Gavesi Meditation Center, Wellington and
Samadhi Buddhist Vihara, Christchurch,
recite in unison, those precious words of wisdom in unwavering faith and compassion believing this chant’s healing power to rid not only New Zealand but also the whole world of this affliction.
ශ්‍රී LankaNZ YouTube channel is going to broadcast the Ratana Sutta , Loving – Kindness chanting live from the four monasteries daily at 7pm until the lock-down period ends.
April   1st Wednesday Wellington
2nd Thursday Auckland
3rd Friday  Christchurch
4th Saturday Hamilton
5th Sunday Wellington
6th Monday Christchurch
7th Tuesday Auckland
8th Wednesday Hamilton
9th Thursday Auckland
10th Friday Wellington
11th Saturday Christchurch
12th Sunday Hamilton
13th Monday Wellington
14th Tuesday Auckland
15th Wednesday Christchurch
16th Thursday Auckland
17th Friday Hamilton
18th Saturday Wellington
19th Sunday Christchurch
20th Monday Hamilton
21st Tuesday Auckland
22nd Wednesday Wellington
23rd Thursday Auckland
24th Friday Hamilton
25th Saturday Christchurch
Loving- Kindness Chanting – Ratana Sutta
It is believed, when humans act in inhuman ways, they come as nature’s way of changing the course of this behavior. During his time in India, a certain city called “Vesali” was similarly afflicted by a deadly disease, which spread throughout the community killing so many humans and animals.
When all possible cures were exhausted, the rulers of Vesali invited Lord Buddha’s compassionate attention. The words of wisdom and the power of his loving-kindness have changed the course of the disease and initiated a process of healing.
Here the Master appeals to all the higher beings to radiate loving-kindness to all human beings and thereby to protect them with diligence. It is important to note, however, that the Master did not invoke any supernatural force but simply stressed the limitless power which is inherited in good thoughts. He reminded all beings, the irrevocable truths of goodness using a series of verses where each of them ends with the wish “By the asseveration of this truth may there be happiness to all beings”. This discourse is named “Three Gems” because these truths encompass, the enlightened Buddha, the means of liberation from suffering, and the knowers and the messengers of these truths who are the equally enlightened disciples, Four Noble truths and specifically the Nirvana which is the state of liberation.
Editor
Sri LankaNZ Community Newspaper