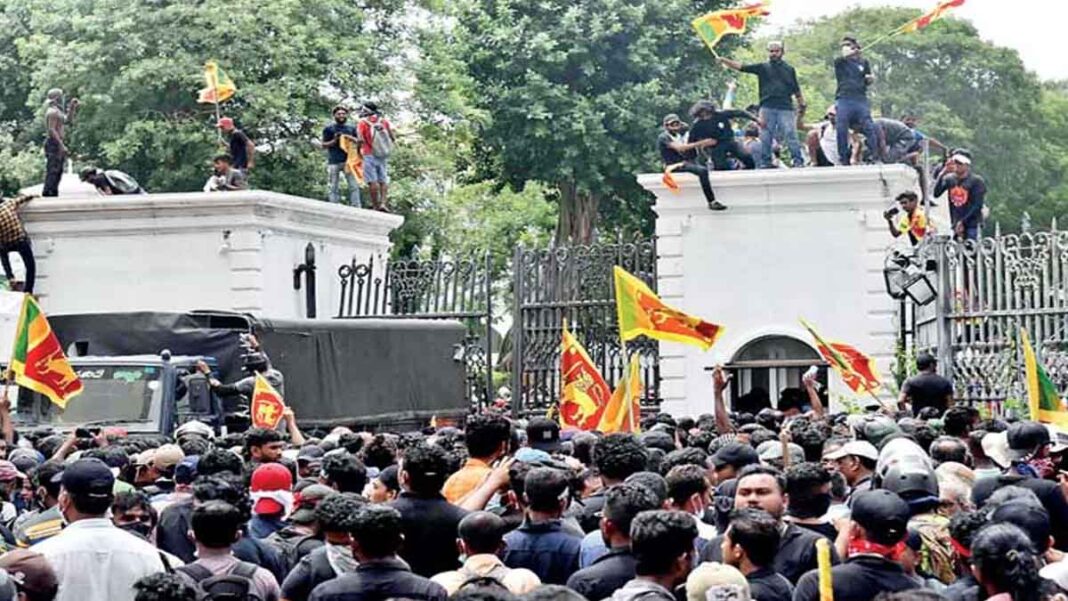 Now that the Prime Minister(Mahinda) has resigned and the President(Gotabhaya) has abandoned his office and left for overseas and has sent in his letter of resignation, which satisfies the two demands that brought the Aragalaya to Colombo, the purpose of this article is to evaluate the current situation in Sri Lanka, and to analyse the events that have taken place, and comment on the legitimacy of the Aragalaya, not in isolation, but in the context of sustainable-politics and the greater public good.

1.Let us record some facts first. I don’t think we would find a single person amongst those who are concerned about the events in Sri Lanka who would have supported the President, Gotabhaya Rajapakse, to continue to stay in office after his disastrous mismanagement of the economy and the chaotic governance of the country. And, as the Head of State with executive power to control all the policies of the Government, surely the responsibility for bringing Sri Lanka to near bankruptcy should rest on him. Also to put the record straight, let me concede that I, in an earlier post in this newspaper, argued that for the time being, the President should be retained until Sri Lanka sorts out its dire economic problems, but only until the Parliament introduces amendments to the Constitution to limit the powers of the President with the ultimate aim of abolishing the Executive Presidency. The reason why I expressed that opinion was because I felt, given that there is no unity within the Parliament to form an all party-government to address the debt issue including Sri Lanka’s engagement with the IMF, on balance, it would be better to keep the President in office to maintain the law and order, but only until such time the Parliament can agree on an all party-government. My concern then about removing the President was that, because the Parliament is fractious, we could ill afford a situation where both arms of the government, the Parliament and President, are disabled, and the disastrous consequences that could ensue if the law and order collapsed. I have never been a supporter of the Rajapakses, and have often had intense arguments with close friends that the Rajapakses, with their gang-building politics, will ruin the democratic fabric of Sri Lanka. When Mahinda Rajapakse lost the Presidential race to Mithrpala Sirisena, I told a close friend that, just like how Winston Churchill, who was such a revered figure in the UK having saved the free-world from the Nazi dictator, lost the next general election soon after peace returned, Mahinda Rajapakse should take the hint and quit politics. If he had done that, Sri Lanka would not be in the mess that it is in currently.

2.The current situation in Sri Lanka is quite different to when the people’s peaceful dissent soon consolidated into Gota-Go-Home and later the added Maina-Go-Home which together formed the Aragalaya. The Aragalaya has won its perceived battle, and their objective has been realised, because both the Prime Minister and President have vacated their offices. Some radicals who have hijacked the Aragalaya now, as we saw in the Al Jazeera and BBC footages, have changed its course, and it looks that they are using the Aragalaya to alter the democratic processes of the government by violence. What we saw in those footages, when the insurrectionists attacked the TV/Radio Stations, and when they stormed into the Prime Minister’s Office, were not peaceful demonstrators with a clear demand, but people with plans to suffocate the current democratic system and grab political power by force. In the interviews, they were saying that every appointment from now on should get rubber-stamped by them, a clear indication that they were fighting to install their preferred leader/s from the Parliament to the positions of Prime Minister and President. Clearly, as we saw, the Aragalaya now is not the uniform force that it was when it started, instead it has been hijacked by groups that are acting as proxies for political leaders who don’t have the majority support in the Parliament. People express their pleasure/displeasure of who should be the President/Prime Minister only at the relevant election. Like it happened in many overseas countries, Aragalaya is about peoples-power. That the people, if they can collect together in large numbers, will make it difficult for the law enforcement agencies to handle, leaving the shooting at them as the only available option. However, that option would risk thousands of casualties which clearly no government would be able to live with. Whereas in almost every country where, including the more recent Arab-Spring, people’s-power movements were successful in unseating dictators and installing their preferred leader, the Sri Lankan Aragalaya is leaderless, and consists of varying factions that have come together because of the dire economic circumstances, and because they have no confidence in their leaders, because of the mistakes already made. They were convinced that the brother-duo are incapable of getting the country out of the mess. Not having a leader of their own, and a fully-functioning Parliament still in tact, surely Aragalaya should now allow the democratic processes to follow.

3.In my earlier article when I expressed my opinion, particularly in the context of the protest by the expats in Wellington, that it was not the right time to remove the President because of the disunited Parliament, the current situation in Sri Lanka is one of the scenarios that I predicted, that Sri Lanka will be without an effective government, and that the warring parties in the Parliament will bring their differences into the open, and the security forces will be confused who to listen to. Well, that has already happened. We often hear statements from Sajith Premadasa of the SJB and Anura Kumara Dissanayake of the JVP expressing their opinions of what should happen next, and expressing their opposition to Ranil Wickramasinghe being the Prime Minister, and now the Acting President, and offering themselves available to become the Prime Minister/President. The behavior of these two leaders, who both are experienced in parliamentary democracy, is funny. Democratic processes require the following of the Constitution, and in countries without a written Constitution like New Zealand, following the customs/traditions of governance. The Sri Lankan Constitution clearly spells out that, when the President resigns by a letter addressed to the Speaker, the incumbent Prime Minister shall become the Acting President until the Parliament elects a President, and that such election of the President shall happen within 30 days. So, if we want Sri Lanka to remain a democracy, we have to respect Ranil Wickremasinghe’s appointment as the Acting President, whether we like him or not. And, when the Parliament within the 30 days has to elect the President for the remainder of the outgoing President’s term, again, the Constitution says that such election has to be by a majority of the Members of the Parliament. And again it does not matter whether we approve of the person elected by the majority, and it has even less importance how willing and eager Sajith Premadasa and Anura Dissanayake also want to be the President. The same rules and processes apply for the election of the next Prime Minister, which will again be by the majority in the Parliament.

4.It is no secret that Sajith Premadasa and Anura Dissanayake have repeatedly refused to join a unity-government, and if we concede some merit that their refusal was because they didn’t want to be in a government still headed by Gotabhaya Rajapakse, then surely now is the chance. What is increasingly visible is that, both these leaders are using the Aragalaya to buy themselves political positions that they haven’t obtained from the people’s mandate. And the people involved in the Aragalaya too should realise that they now have to go back home, and let the democratic processes run, unless they want the chaos they create to play into the hands of the military, who will have no option but to suspend democracy, put the country into irreversible bankruptcy, encourage civil war, with the possibility of the disintegration of Sri Lanka’s sovereignty. We are reminded of the two JVP-led insurrections, in 1971 and 1987-89, and how the government and the people of Sri Lanka fiercely fought back to save democracy. Clearly, Aragalaya has fulfilled its initial purpose, and history will remember them for the courage they exhibited to bring about a meaningful change. Aragalaya also has reached its limit and the boundary, and if they continue further, and particularly in the violent manner we saw when they stormed the Radio/TV stations and the Prime Minister’s office, their campaign from now will be termed an insurrection, inviting the security forces, as they did in 1971 and 1987-89, to defend Sri Lanka’s democracy, and the insurrectionists will solely be responsible for any bloodshed and casualties. Of course, there is one noble democratic pathway for the leaders in the Aragalaya to pursue, and that will be their best contribution to strengthen and revitalize Sri Lanka’s democracy, and that is to form themselves into political parties/movements and participate in future elections, and get elected to the Parliament to play a role in policy-making and governance. If they undertake that path, Aragalaya will get immortalized as the best thing that happened in Sri Lanka’s political history.

5.There is one other matter connected with the current situation in Sri Lanka that is worth commenting on, and that is the exceptionally professional manner of the services personnel. Whereas we have often seen in other countries when dictators are in trouble, the extent to which the armed services leaders will protect them, sometimes even firing indiscriminately at protestors, and other times using the protests as an excuse for the armed services leaders to take over political power, the Sri Lankan armed services leaders have thus far maintained the highest standards of professionalism, balancing the people’s right to protest but also taking steps to protect the public and the government’s property. Contrary to what is propagated by overseas-based separatists about the conduct of the armed forces during their campaign to save Sri Lanka from the ethnic terrorists, what we have seen so far is an outfit that conforms to the highest international standards.

Only sorry thing is why our politicians are unable to emulate the armed forces, and put the national interest above their ambitions when it comes to crises.