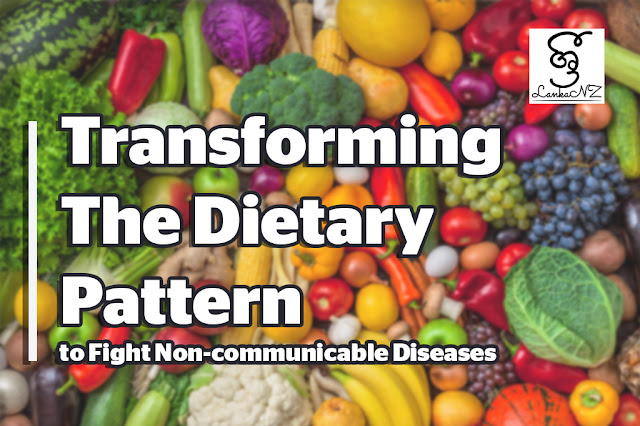 According to the Food and Agriculture Organization of the United Nations (UN FAO), hunger and malnutrition affect millions of people in the current world and it is increasing.
Meantime unbelievably in some parts of the world are suffering from the non-communicable diseases (NCD). NCDs are a global problem rapidly gripping this world in an epidemic form with serious health, social and economic consequences. NCDs consist of a range of diseases, including cardiovascular diseases, diabetes, chronic respiratory diseases, cancers, and mental health problems. According to the World Health Organization (WHO), NCDs are estimated to account for 89% of all deaths in New Zealand in 2018. Out of these cardiovascular diseases and cancers are the number one and two causes (31% and 30% respectively).
NCDs are mostly caused by unbalanced dietary patterns, harmful use of alcohol and insufficient physical activity. As Sri Lankans living in NZ, we tend to continue our Sri Lankan non-traditional eating habits which have larger portion sizes, higher carbohydrate levels, higher unhealthy fats (saturated and trans) and sugar levels even though we do not do enough exercise. Other than the above factors we are the victims of dramatic change in the food system during the past decade.
Unhealthy diets are closely linked with these diseases. Food and drinks play a major role in preventing non-communicable disease. Improving the quality, quantity, nutritional value and diversity of the food we eat can help us avoid NCDs.
How to prevent non-communicable disease by changing daily lifestyle habits
Change the dietary pattern
Consuming predominantly whole, plant-based foods reduces the risk of diabetes, obesity, cardiovascular disease and some forms of cancer.  Plant-based diets are diets that focus on foods derived from plant sources. Consuming more vegetable, fruits, whole grains, nuts and seeds can help prevent cardiovascular diseases. Researches suggest that particular vegetables including cruciferous vegetables such as kale, cabbage, broccoli can also protect from developing some types of cancers. Reduce processed meat, saturated fat and trans fat also causes to decrease NCDs like cancer and cardiovascular diseases.
Reduce salt intake
Cardiovascular diseases and hypertension are associated with increased consumption of dietary salt (sodium).  WHO recommends reducing salt intake to less than 5 g/day (equivalent to 2 g/day of sodium) to reduce blood pressure and the risk of coronary heart disease and stroke.  Some tips to help to reduce salt intake are; choose whole, unprocessed foods and eat plenty of vegetables and fruit,  take salt and salty sauces off the table so younger family members won’t develop the habit of adding salt, cut back on processed meats, smoked foods and salty takeaways.
Reduce excessive use of alcohol
Harmful use of alcohol leads to over 200  health conditions and the majority of which are NCDs. Including liver cirrhosis, cardiovascular disease and cancers. Simply decrease the amount of consuming is the best way to decrease the risk. According to the ministry of health NZ, reduce long-term health risk by drinking no more than: 2 standard drinks a day for adult women and no more than 10 standard drinks a week, 3 standard drinks a day for adult men and no more than 15 standard drinks a week and at least 2 alcohol-free days every week.
Other than dietary changes regular physical activity reduces the risk of NCD.  Sufficient physical activity is a determinant of energy expenditure and along with healthy eating can impact weight control and prevent obesity which eventually leads to several NCDs.

Living in a Paradise? – 03 By Upali Salpadoru

Ranner the Beautiful Prince a Short Story by Pulitha Jayasinghe