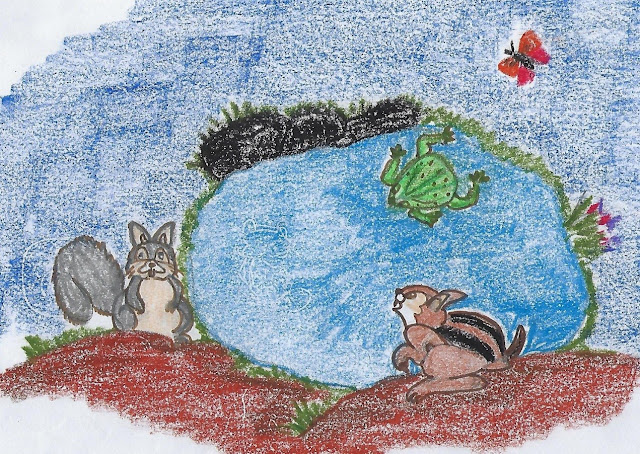 One lovely autumn morning, Rampus the squirrel went to see his friend Ren the chipmunk. They were very best friends. Rampus loved to play with Ren.

One day Rampus and Ren went out into the jungle. They were having lots of fun jumping and swinging on the jungle trees. Then they saw a pond. They were very thirsty, so they went to the pond and had a drink of water. While they were drinking water, they saw lots of beautiful things such as colourful butterflies, lots of pretty birds singing and little insects. They also sniffed the flowers and saw some little bunnies. When they stopped drinking, they saw something strange. It was jumping high and green in colour with big eyes. But Rampus and Ren did not know what it could be.  So they went to their parents and asked.
‘We saw something strange at the pond, it was going rebbeck-rebbeck-rebbeck.’
Their parents said,
‘That is a frog. The frog is green and it can jump up high’.

Now Rampus and Ren know what a frog is.
One week later, the two best friends went out again into the jungle to see the pond. When they came to the pond, they saw two frogs jumping on a puddle. Rampus and Ren wanted to join in with the two frogs. Rampus went and asked from one frog,
‘Can we play with you two?’
The frogs were very excited and were very happy and invited Rampus and Ren to join them. They played the whole day with the frogs and enjoyed a lot. It was almost night, so the two best friends went to their mums and dads. They were being very kind to each other and lived happily ever after.

Like Threads in a Lace by Dr Anne D. Perera