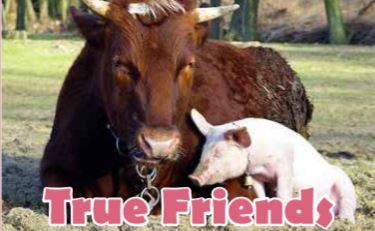 Annabel sat in a corner in front of her mud house. She counted the days. Three more days to go. She was thinking about how she would make sausages….. after killing the pig. She had already paid the butcher. On Wednesday Simon would come to kill the pig. Some of her neighbours ordered sausages. Annabel took out the old notebook in which she wrote down all her financial matters. Sandra ordered thirty sausages and paid an advance as well.

The fat pig would bring her more than Rs. 4000. After all, she did not spend any money to fatten the pig. It roamed around the field with the two bulls ever since she brought the pig home. It slept beside the bulls, eating whatever it could find. For a moment Annabel felt very happy.

‘ O.K. yeah …Good. bring me a cup of coffee. I like those brown biscuits ‘

‘ It’s lunchtime, why do you want coffee now? I have done the cooking ..’

Annabel ran to the kitchen. She thought if he goes to the café it would end up with a large sum of money which she has to settle down.

In the morning Annabel kept everything ready. The first thing was tying the pig to the stump near the kitchen. Then she washed all the big pots in which she put the meat… She kept the big bowl beside the pots to collect blood. She hurriedly sharpened the knife. Checked twice to see if everything was ready. She didn’t miss out on anything. Everything was ready…

Pig began to grunt. Perhaps it sensed its end would be coming soon. It grunted very loudly and tried to pull the rope running round and round. The two bulls too sensed something unusual. They did not go to the field. Instead laid down in the resting place beside the pig.

Annabel was impatient. She went several times to see whether Simon was coming… At last, Simon came with his gun. He took off the two wooden poles and came along the footpath.

Pig’s grunt was very loud. Neighbours came out to see what was happening.

Simon could not lift one more step forward. The two bulls ran forward charging. Simon was dumb founded . He never expected such a thing. Never before had he had this sort of experience. Last year he killed Annabel’s pig. Everything went smoothly.

Simon could not believe his eyes. He was so frightened and the gun dropped down.  He thought he would be killed instead of the pig. He could not decide what to do. He stood there as his legs were frozen. He did not try to get the gun.  As soon as he came to his real senses Simon began to run. While one bull chased him the second bull stood beside the pig guarding   like a brave soldier.. Simon ran as fast as he could. The bull also ran behind him and chased him out of the gate.

Annabel shouted. She screamed at the top of her voice but the bulls did what they wanted.

The bull came back after chasing Simon. Usually by this time they were out in the field happily grazing. The pig was grunting throughout the morning continuously. Saliva-like foam fell down from his mouth…Gradually his tenses began to slow down. He stopped grunting. The two bulls took turns licking the saliva. They licked the pig all over.

After some time Simon thought he could get the gun. He tiptoed from the back garden and managed to come. Then one bull saw him and began to chase him wild. Simon ran as fast as his legs could carry him and jumped over the neighbour’s fence and escaped, never to return to Annabel’s house.

Annabel decided to untie the pig. That very moment all the three ran to the field happily.

You are my Sister | Lalindu Munasinghe | Wellington