Home New Zealand Finding my place in the land of the long white cloud –... 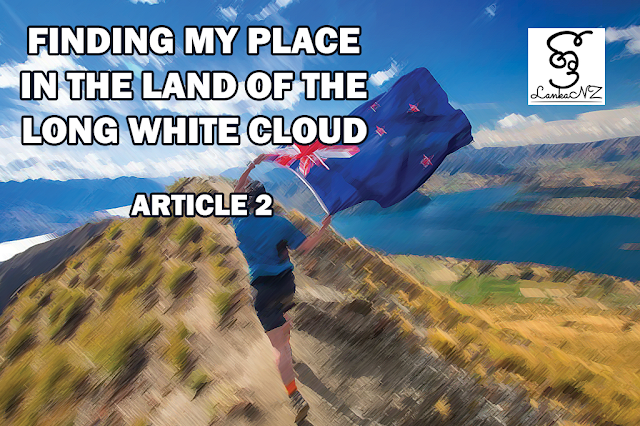 (The second article in a series exploring the journey of a Sri Lankan immigrant teen to NZ)
An ethnic group is a category of people who identify with each other, usually based on presumed similarities such as common language, ancestry, history, society, culture, nation, or social treatment within their residing area. In Sri Lanka, most individuals ethnically identify themselves as either Sinhala, Tamil, Muslim, or Burgher. Around the world, many utilise their ethnicity to help define themselves. Therefore, when I first arrived in New Zealand, I identified as a Sri Lankan Sinhalese.
Many Sri Lankan Sinhalese take great pride in their heritage that spans beyond 2500 years. As a teenager in a New Zealand high school, the story of our ancestors was unlikely to get me ‘cool’ points. Hence, I recall the constant tug of war in my mind between being Sri Lankan and fitting in with the Kiwis. Fortunately, I realised in my teens that I could never be a Kiwi in every sense of the word. After all, I had learned everything I knew over the first thirteen years of my life in the jewel of Asia. Over the next five years in High School, I embarked on a journey to find what it means to be a Lankan Kiwi.
One of the first forms of expressing Lankan culture for me was rapping in Sinhala at school. In the early 2000s, the now-legendary Sri Lankan singing duo Bathiya and Santhush were breaking into the scene. One of their most famous songs at the time was “Siri Sangabodhi Maligawedi”. Fortunately, this song had a sequence of rapidly recited words that was in line with rap. I knew I had no unique rapping ability. However, since the song repeatedly played on TV and radio, a few lines were etched in my mind. To my great surprise, kids at school enjoyed hearing me recite these lines. I soon realised that this song was a unique medium to communicate a small facet of my Sri Lankan identity. At this early stage of my life in NZ, I was happy to take any opportunity to build a bridge with this new world.
My love for rap also encompassed a significant interest in the music of the rap artist, 50 cent. When his album “Get rich or die trying” was released, my life changed forever. The clothes, the walk, and the talk portrayed by 50 cent provided me with a new set of tools to express myself. I feel that teenagers are akin to a curry pot; a bit of five-spice, curry leaves, turmeric, chilli, and salt, all mixed and ever-changing in flavour. Hence, when you search for the sweet spot to stop, you continue to change and find a new equilibrium. The years of my relationship with gangster rap led to an obsession with track pants, tight-fitting shirts and singlets, hours of hairstyling, use of gangster language, and a newfound attitude towards life. That teen Lankan boy was never the same.
Another prominent facet of my teen life in NZ was physical fitness. I was not a sporty child. The highlight of my Sri Lankan school sports career was me being a reserve for the 100-metre race. Since the main competitor was injured, I had to participate in the event. I remember the terror that set in as I stood at the start line. Nor training, neither fitness was on my side on that day. As I hit my stride, I watched helplessly as my competitors crossed the finish line before me. Despite the result, my heart was brimming with pride. After all, I got the opportunity to represent my house at school.
Following my move to NZ, I soon realised my level of physical activity was vastly behind expectations. I recall stepping out in a green top and shorts, on a cold autumn day to do physical education (PE), for the first time. Sri Lankans are not engineered to handle cold climates. Most days in Colombo are between 25 to 35 degrees Celsius. The average autumn temperature in Wellington is between 10 to 15 degrees Celsius with 100 kilometres per hour southerly winds. As I stood in line with my PE classmates for roll call, I was confident that I would perish in the cold wind. There was no choice but to run for survival. The bridge run along the banks of the Hutt River, the beep test where you ran from end to end at the gym, softball, rugby, netball, basketball, and rhythmic gymnastics were all part of PE. Over time, most of these activities in the cold winds of Wellington became a routine part of my life. I trekked around the hills, walked along the open green plains, ran along the Hutt riverbank, by choice. New Zealand made me fall in love with the outdoors. Over those early high school years, a couch potato turned into a lover of outdoors.
In the next article, I will further explore the significant role played by sports in my young immigrant life. However, to this day, I remain uncertain about what it means to be a Sri Lankan Kiwi. It may be impossible to provide a single answer to such a multifaceted question. Perhaps, finding the true meaning of being a Sri Lankan Kiwi is a personal journey of discovery that spans an entire lifetime.
Dr. Nehan Ruwantha Munasinghe
(University of Sydney).

Become a supporter to your only Community Newspaper -SriLankaNZ