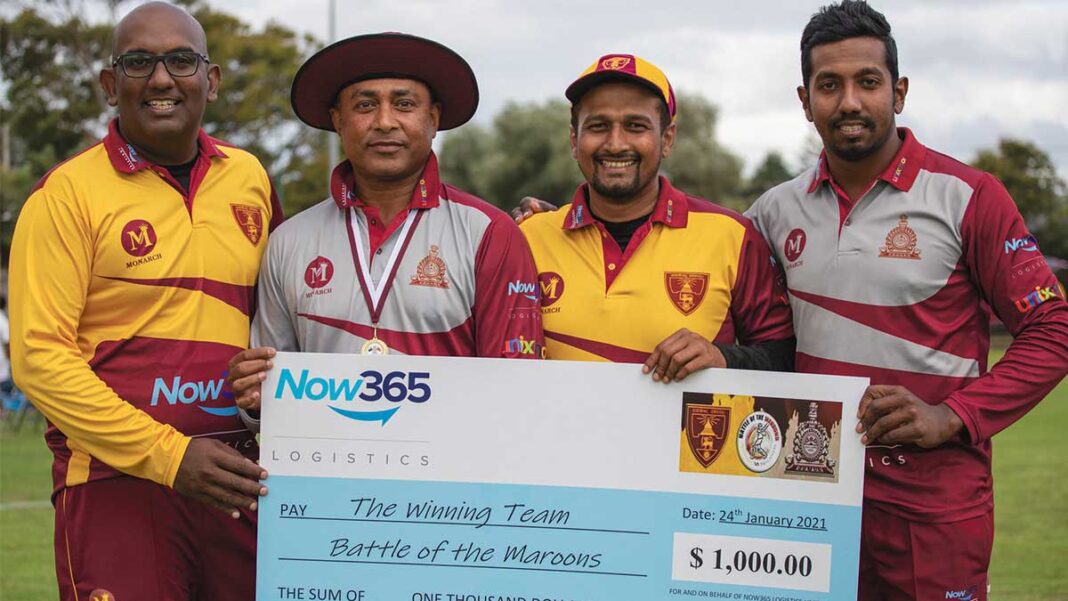 Bragging rights were on the line this year as the first two games were split. Ananda won the inaugural encounter, but Nalanda came back strongly to win the 2nd encounter. The Ananda team was led by Rangana Jayawardena this year, while the boys from Nalanda battled it out under the captaincy of Pubudu Nuwan. This much-anticipated game lived up to its hype as Ananda College beat Nalanda College by two wickets in a nail-biting finish this year.

It was a gloomy overcast in Auckland. Ananda college captain Rangana won the toss and unsurprisingly invited Nalanda College to bat first to take advantage of bowler-friendly conditions. Ananda College made a great start, but Nalanda College managed to recover well, thanks to their middle and lower-order batsmen. They ended up making 178 for nine wickets after their full quota of 40 overs.

Ananda College started their chase brilliantly and, they were cruising at 84 for one after 13 overs at one stage. Ananda College opening batsman Chamala was instrumental in his inning and played a valiant knock of 47 in 42 balls. Nalanda College pegged back with four quick wickets, and the game was in the balance when Ananda College were 97 for five after 18 overs. Competition was there to take for both teams at that stage, but finally Ananda College managed to hang in and chased down the total with two wickets in hand in a thrilling finish. Special mention to Gayan from Ananda College who came into bat and played a vital knock for the team after fracturing his thumb when fielding.

Game was played in good spirits by both teams, and it was great to see such amazing support for both teams throughout the day from old boys, friends, and families.

However, the real motive of this year’s encounter was not just playing a game of cricket. The organising committee has decided to use the opportunity to get involved in a worthwhile community project. Before the match, both captains have agreed to donate the winner’s prize money for this initiative. It is with a great privilege to announce that we have teamed up with legendary Sri Lankan cricketer Mr.Rohan Mahanama to donate the winner’s prize money of NZD 1000 to the ‘SOS Children’s Villages,’ Sri Lanka.

‘SOS Children’s Villages’ create a loving family like care environment for children who have lost parental care in 136 countries, including Sri Lanka. At present, the organisation ensures the wellbeing of 860 children and alleviated 3,200 low-income families in different parts of the country.

It was a great honour to participate in this great initiative and both teams got right behind with the project from the start.  A huge thank you to everyone who supported us in many ways. Thank you!!