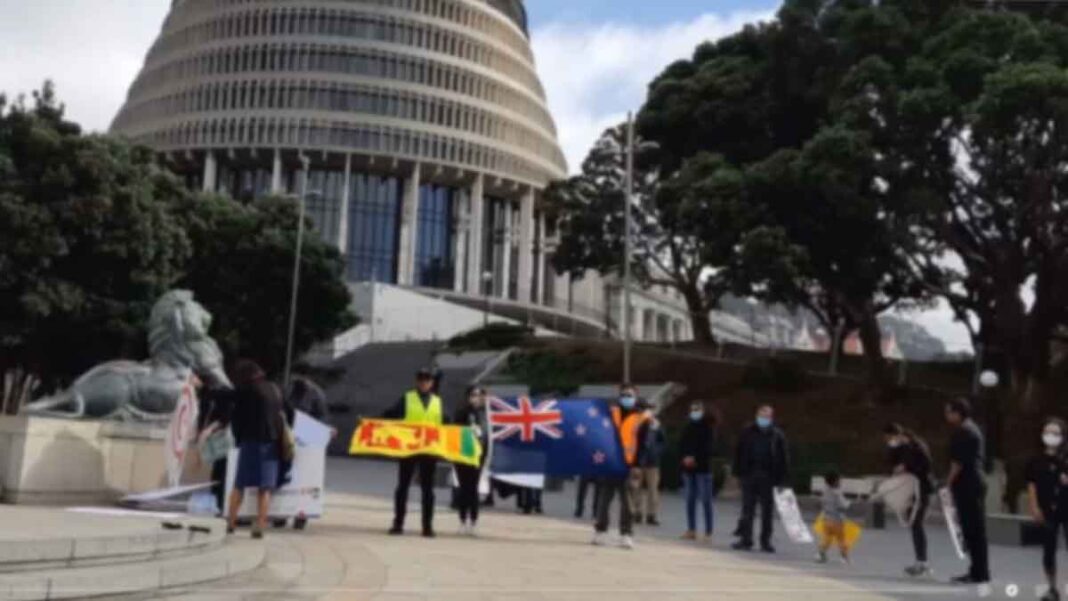 Following on from the protests against the Government of Sri Lanka (GOSL) by expats in several major Western cities, recently a small group of Sri Lankan expats stood on Bowen Street in the Wellington’s Central Business District to protest against GOSL. The Wellington protest however was somewhat different for at least two reasons. Firstly, it appeared hastily-organized and initiated by people who felt a need to do it because protests had been done in other cities, and secondly because it lacked a common theme or purpose, with one group present claiming to be a Christian Group and saying that their interest, as expressed by the spokesperson, was mainly getting accountability from GOSL for the Easter Sunday bombing. The right to protest is an important tool in democratic societies, and is often used by the masses to showcase their anger against or opposition to the government for its policies or because the government has not delivered on its promises. But, to be effective and get any tangible results, and to get mass support, protests have to be meaningful and purposeful, and the timing has to be right as well. Whilst not intending to support the GOSL or the protest movement, the purpose of this article is to take a deeper look at the Sri Lankan crisis, and to unravel the economics and politics behind the protests, and finally offer some wisdom.

The current situation in Sri Lanka that has brought many people on to the roads in Colombo, and a few others to the streets in their adopted countries, is an economic one. The main reason that drove Sri Lanka to this unprecedented economic collapse is the country’s dwindling foreign reserves, which meant that Sri Lanka was not able to pay with dollars for the essentials such as food, medicine and fuel. The depletion in foreign reserves was mainly due to the decline in tourist numbers and remittances from the workers in the Middle East in the last two years due to Covid. However, this is not the whole story, but only the first two chapters and the other chapters are the inefficiencies and economic downturn brought about by bad fiscal management, political patronage, inefficient use of the valuable human resource, loss-making think-big projects, corruption in the administration, political interference in key public sector appointments, the appointment of political backers to unsuitable jobs, etc. But, had the first two chapters not happened, it is more than likely that Sri Lanka would not have been in this crisis, there would not have been mass-scale protests, and the people would most likely have waited for the elections to oust the President and the government of his brother. Since independence, although there had been several attempts to overthrow the government by force and violence, Sri Lanka has remained a shining example for all the democracies to follow, that governments are voted (not booted) out. In this context, the people who participated in the protests were trying to make history.

In Sri Lanka the protests are justified because of the acute food, medicine, and fuel shortages, and because the protests there are partly driven and encouraged by the different warring factions in the Parliament. Not having either of those factors, expats had the chance to look at the bigger picture, without simply emulating the Sri Lankan locals and doing Mexican Waves in their adopted countries. In matters like these, we should be expressing solidarity with Sri Lanka and not necessarily with Sri Lankans, because Sri Lankans are divided. The people who protested in Wellington, except the ones who had their own agendas, surely were driven by the episode they had seen about Sri Lanka on social media, whereas they should have taken the time to study a preview of the script for the episode that is yet to come if the protestors succeed in removing the President. When a ship hits an iceberg, the first thing you do should not throw the Captain into the water, rather it is more prudent to allow the Captain to get the ship to the shore and then deal with the Captain for his/her mismanagement. Given the consequences that will necessarily follow, for the Sri Lankan people bringing down the President during this time of civil unrest will be like falling from the fry-pan into the fire.

It is important that, in times of unprecedented economic hardship in Sri Lanka, expats don’t paint a picture of instability and chaos about Sri Lanka in their adopted countries and add further damage to Sri Lanka’s reputation, because decisions to offer food and other emergency help to Sri Lanka by donor countries could get adversely affected by such bad publicity. Also, such bad publicity could have a negative effect on tourists going to Sri Lanka that could deprive the country of the opportunity to earn the much-needed foreign currency. I believe this is not a time to throw the President out, because that can create a power vacuum that could easily lead to sectarian violence, and even territorial separation, just like in Lebanon. If there was one lesson to learn from the over 30-year-old ethnic war that ended in 2009, it is that Sri Lanka can protect its sovereignty and territorial integrity only if the Government remains strong. Those who watched the Sri Lankan Parliament Live, would have witnessed how many factions there are and how divisive they are, and how unwilling every member is to listen to the others, only interested in shouting out their stories. After nearly two weeks of debate on this single issue, there is still no consensus in the Parliament. If we get rid of the President now, all these warring factions in the Parliament will come out into the open and have to fill the vacuum left in the Executive Power. If the warring factions fight out their differences outside of the Parliament, the people who are now protesting against the President will have to divide themselves in favour of the factions that will now vie for power. If that happens, who will the army listen to and take orders from? If the army is pushed into such a situation, there is a good chance that unprecedentedly the army too may take sides. So, what is more, important now is to get the Parliament sorted, and find a unity government that could present a good case to the IMF, and then deal with the President later if that is what the people want. The President remaining in office is vital to maintaining law and order until we get the country’s economic woes sorted.

When a country manages to harness its peoples’ power, a better thing to do will be to use such power to effect meaningful reforms. Such changes have already started in the Central Bank. We should be encouraged by the President’s appointment of Mr. Nandalal Weerasinghe as the Central Bank Governor. Mr. Weerasinghe who graduated from Kelaniya University has a Master’s and Ph.D. degrees from the Australian National University in Canberra. He is a former Deputy Governor of the Central Bank and has also worked as an Alternate Executive Director of the IMF. Mr. Weerasinghe has been invited back to head the Central Bank from his home in Melbourne by the President and is understood to have asked for the assurance of total control of the Central Bank’s functions without any interference from the politicians as one of his conditions for taking up the appointment. So, people in Sri Lanka should now agitate for similar changes in the other key offices like Attorney General, Auditor General, Election Commissioner, Judiciary, Ombudsman’s Office, etc. Sri Lankans should learn to move away from personality-hugging politics to trusting the institutions, and let the institutions, and not the politicians, run the country, leaving the politicians to design the vision only.

So, all these bring us to the question of what the expats should do in a time like this. A similar example from the past would be how, under the leadership of the United Sri Lanka Association (USLA), the community rallied to help Sri Lanka’s needs after the Boxing Day tsunami. Of course, I concede that there was no political issue involved on that occasion, but why I used that as an example is because we could have used a similar process before deciding to protest on the streets in Wellington. From the community’s point of view, clearly, the Wellington protest was hastily organized, not discussed with the community in a Hui, nor was the community’s input obtained before staging it. Given the small number that participated and the strongly-held emotions of the majority against the protest, this unilateral protest by a few will have caused animosity among the majority that will definitely take a while to heal. When the decision to protest has not been widely discussed in the community, and ideas not harnessed by the majority of the people, the organizers of protests always expose themselves to accusations of being agenda-driven and/or opportunistic. So hereafter, it will be a better way if the community is consulted and its input harnessed before engaging in exercises that impact on the peoples’ emotions.