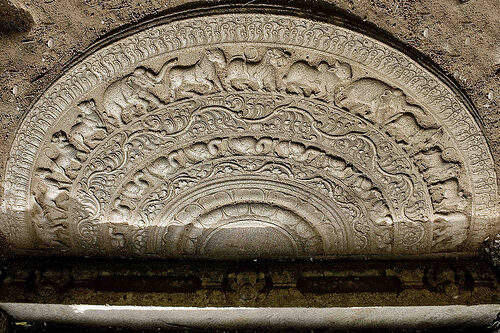 Before the arrival of Prince Vijaya in 543BCE, Sri Lanka (Lanka, then) was populated by Yakkha (Yaksha- demon) and Naga (serpent) tribes. The Dimbulagala area is said to be the Yakkha’s habitat (Yakshapuraya) while Nagas (the serpent clan) lived in the northern and western parts of Lanka.

The aadiwaasi (aboriginal) village of Yakpuraya (Yakkuaray) situated close to Dimbulagala is believed to be the centre of the ancient Yakkha Kingdom. The King’s Castle in this Yakkha Kingdom was located on the Dimbulagala mountain. The Yakkha gothric residents of Yakshapura (Dimbulagala) and those of Shirashawasthupuraya (Kuveni’s people- this place could be in the Mannar area where Kuveni met Vijaya but uncertain at this time) were said to be related very closely. After the fall of Shirashawasthupuraya, the members of the Yakkha tribe came to reside in Dimbulagala. According to folklore, a powerful regional king of Yakkha tribe by the name of Mahasena reigned in the Dimbulagala area, during the time of the arrival of Prince Vijaya.

The Nagas must have had a presence in the Nagadeepa area of Lanka. Mahavamsa chronicle states that the Buddha, during his second visit to the island, pacified a dispute between two Naga Kings Chulodara and Mahodara, of Nagadeepa; the dispute was over the possession of a gem-studded throne. This throne was finally offered to the Buddha by the grateful Naga kings who left it in Nagadeepa under a Rajayathana tree (Kiri Palu; Buchanania axillaris) as an object of worship. The chronicle further states that in the eighth year after the Enlightenment, the Buddha visited the island for the third time, on an invitation of Maniakkhita, the Naga king of Kalyani (Modern day Kelaniya) who was the uncle of the Naga king of Nagadeepa.

In the Tamil epic Manimekalai, which is widely disputed as to the period of its composition even among the Indian experts, the heroine is miraculously transported to a small island called Manipallavam. In the recent times there have been rigorous attempts at identifying Manipallavam with Lanka based on the similarity of the legend about a seat given to Indra in Manimekalai to the Naga throne being offered to the Buddha in the Mahavamsa.

Prof Senarath Paranavithana rejects the identification of Manipallavam with northern Lanka, firstly because Manimekalai’s Manipallavam was an island and was uninhabited, whereas the northern Lanka has never been an island and has been inhabited for over centuries before the date of the epic (varying between 501 to 600 AD or even during the Chola period in 848 – 1271 AD). Paranavithana also notes that Manimekalai does not mention that the two Naga kings had their abode in Manipallavam as do the Naga kings in Mahavamsa, nor does Manimekalai mention that the holy seat was placed there by the Buddha, but by Indra. Manimekalai further states in canto IX, II 13–22 that an earthquake destroyed a city in Gandhara which in turn affected 100 yojanas (about 1200-1500km) of Naga Nadu; thus rejecting the identification of Naga Nadu with northern peninsula of Lanka.

In our last reverie we met the Great King Pandukabhaya, the first King of Sinhale. It is the writer’s view that King Pandukabhaya could well be the first true king of the Sin-hela nation, being the offspring of Cittaraja (Chitraraja), the Yakka gothric youth and Princess Ummadhani Citta (Chitra) of the Vijayan/ Sakyan royal dynasty. Thus, he was product of the two cultures that joined to create a new Nation. Mahawansa chronicle claims that Prince Pandukabhaya was the son of Prince Deegha Gamini (a nephew of Citta’s Sakyan mother, Queen Bhadrakatchayana). In fact, Deegha Gamini married Princess Citta, after the birth of the baby prince.

Cittaraja was one of two yakkha gothric guards employed to secure the palace (Et Tam Ge) where Princess Citta was kept under watch. Once the knowledge was out that Citta was with child, both the guards- Cittaraja and Kaalavela, were put to death possibly for ‘dereliction of duty’. Was it only ‘dereliction of duty’ that Chitraraja was guilty of or was it the wrath of the palace against a Yakkha gothric young soldier who dared to conduct a liaison with the princess and impregnate her?! Some researchers such as Cumaranathunga Munidasa, like me, believe the latter is more probable.  Perhaps it was both. The argument I make is that it would not have been easy for the Palace to pose off a Yakkha gothric baby girl born on the same day as being the child that Princess Citta gave birth to if people knew that the child was Deegha Gamini’s; especially to Citta’s brothers who were waiting to kill the infant given the slightest doubt. A full blooded Yakkha child would have been distinguishable from a full-blooded Aryan child in terms of features and colouring. Nor is it easy for one to think that the Yakkha people would have rallied around to guard the baby Prince at the risk of their lives to bring him up at Doramadalawe under the very noses of Citta’s murderous brothers if the infant was Deegha Gamini’s son instead of Cittaraja’s. For its very survival, Citta’s baby needed to have Yakkha features and the deeper skin colour to enable such a daring swap! The native Yakka people were still very much against the invading foreigners; constant skirmishes were reported between the parties until Pandukabhaya grew up to be the King of Lanka and brought the entire country under his command. The only reason that supports the fervour with which the Yakkhas attended to the welfare of the fledgling prince and rallied around him to place him on the throne of Lanka is that the prince was part Yakkha! The Yakkha gothrics saw in the prince, a chance to claim back the country they lost to the invaders.

In more than one way, King Pandukabhaya signalled a defining moment in the history of Sinhale. He was the founder and first ruler of the Anuradhapura Kingdom who brought in the concept of managed provincial administration. He fixed village boundaries in the country and established an administration system by appointing village headmen. He constructed hermitages, houses for the poor, castles, sewer systems, hospitals, cemeteries, prisons, and irrigation tanks. He brought a large portion of the country under the control of the Anuradhapura Kingdom and ruled the country for 70 impressive years.

The beautiful book written by Carl Muller, ‘Children of the Lion’ describes how King Pandukabhaya remoulded the society by changing the caste systems that arrived in Sri Lanka with the Aryans (Vijaya’s people) and replacing it with an occupation-based caste system, remnants of which exists in the island even today:

“Aryan civilisation had brought in the Brahminical system, ranking the Brahamin and Shatriya castes over the cultivators. Yet, over ninety per cent of the community were cultivators and they were, indeed, the backbone of the country.”

“As the royal family, do we not form a caste by ourselves, unrelated to all others?” he (King Pandukabhaya) asked Canda (Chandra), his advisor.

“That is true Lord, but always the system prevailed”

“We acknowledge that, but see, the Brahmins are the soothsayers, the rishis, the wise men, the mouthpiece of the gods. ….we honour them, just as I give lasting honour to your father. …..we will make of the society of people a system which gives them an awareness of their arts, their roles, their positions. And foremost among them will be the Goviya.” (Carl Muller, Children of the Lion)

The north and various other parts of the country was occupied by the Nagas. King Pandukabhaya brought them under notice in no uncertain terms that they were bound by the rule of Anuradhapura. The Nagas were predominantly traders often trading with foreign lands. They had little inclination for governance. The Naga people are believed to be an ancient tribe who once inhabited Lanka and various parts of Central Asia including India and Burma. It interesting that to this day there is a state called Nagaland in northeast India, bordering Myanmar. There is no credible evidence to suggest that people of Nagaland today are of the same stock as the Nagas that occupied Lanka in the pre-Vijayan era; however, the possibilities remain and we move on with our story!

Muller explains how the Nagas were delighted with the consecration of Pandukabhaya as the King of Lanka:

“The Nagas too rejoiced. They were secure, catered to and in the long years that followed a great assimilation made the people as one.” Carl Muller, Children of the Lion- Anuradhapura- pp 365. Such peaceful co-existence of the inhabitants was a great characteristic of the Pandukabhaya era; and this peace and prosperity followed into the realm of his son, King Mutaseeva, who succeeded him.

King Pandukabhaya built many tanks (‘wewa”) to collect the rain water and irrigate the cultivated land. Abhaya reservoir (now Basawakkulama wewa) 330 acres in magnitude, was his pride and joy. Muller says of the Abhaya Wewa in Children of the Lion “…it was to play a vital part in beautifying the pleasure gardens, filling the many royal baths and bathing ponds, meeting the needs of the city and its swelling population, and sending out its long fingers to irrigate the precious fields of rice.” With the pride of place being given to the farmer and his occupation it comes as no surprise that the country was prosperous to the core at the time of King Pandukabhaya’s death. Even prior to his consecration as king, Pandukabhaya deepened a pond in Anuradhagama, filled it with water, and took water from this pond for his consecration festival. This deepened pond was called Jayavapi; Jayavapi is suspected to be the Bulan Kulama wewa in Anuradhapura today.

The legacy of Anzac: Why is it still so significant?