Home History Like Threads in a Lace by Dr Anne D. Perera 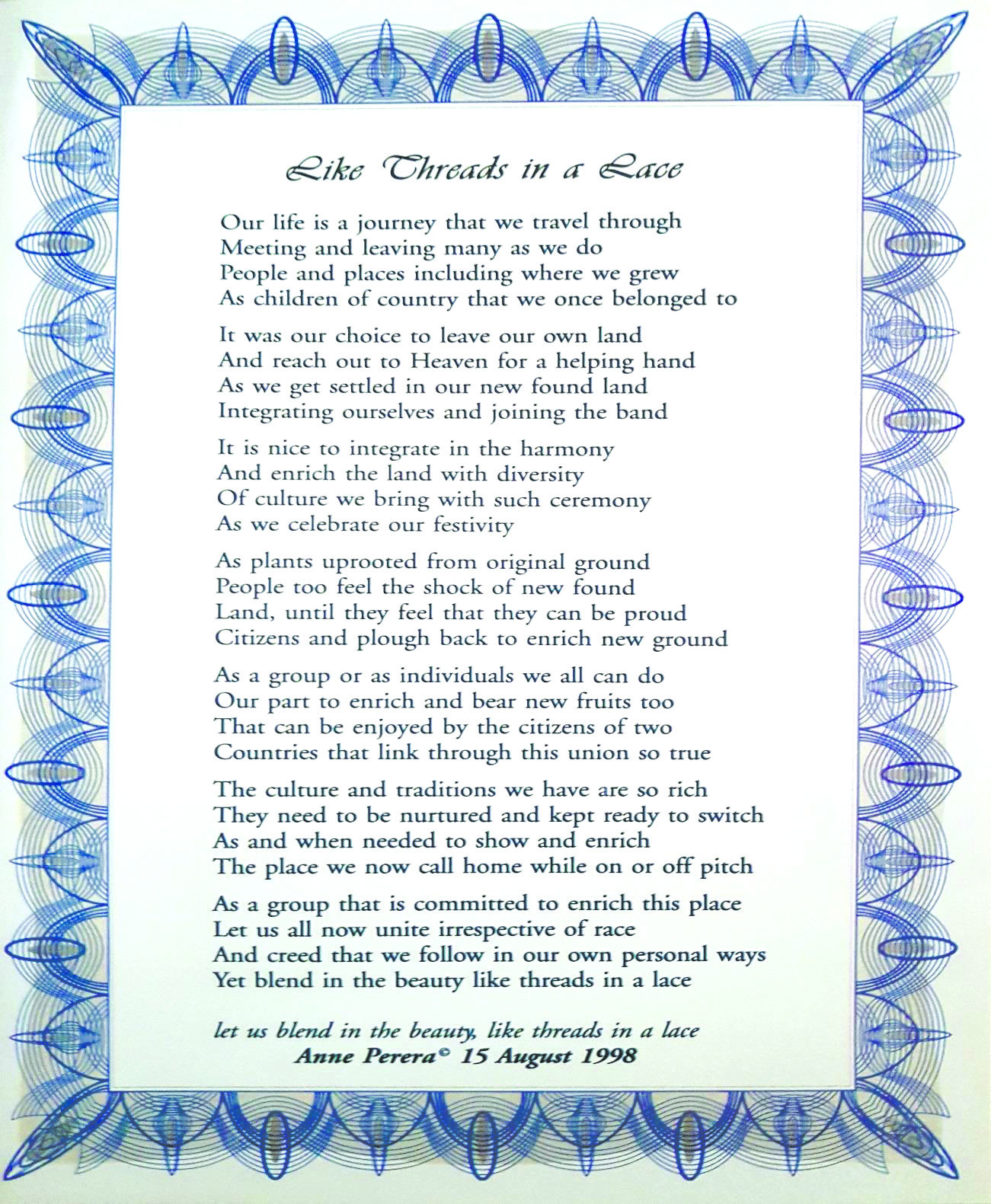 Imagine that each one of us represents a thread of a specific colour, texture, length and strength….  Whenever we are in a mixed group, such as with our friends, at school or at work place, the place of  worship, our neighbourhood, in our city and country, we can weave ourselves into a unique “lace”  that will be more beautiful than just being like a single piece of tread. People who live with each  other in peace and harmony are extremely fortunate. They bring synergies to work through  differences and achieve greater heights than they can as individuals. That is how I saw the Sri  Lankan immigrants who came to New Zealand in mid-90’s. that is what inspired me to  compose the poem titled “Like Threads in a Lace” that was presented at the inaugural  meeting as I concluded my acceptance speech as the first elected President of the New  Zealand Sri Lanka Foundation (NZSLF) on 15th August in 1998. 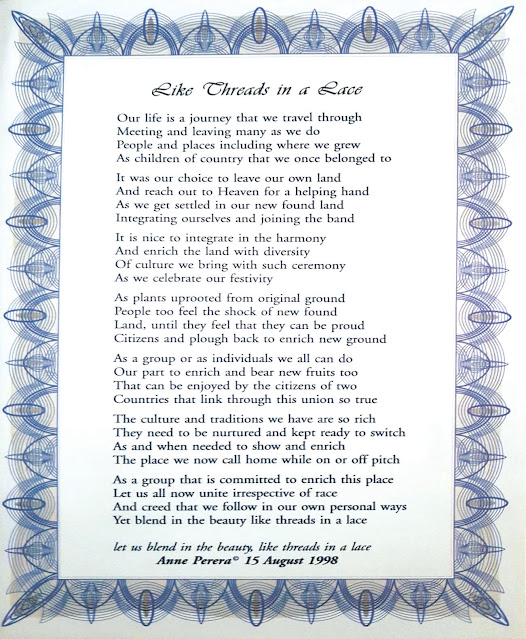 First, let me share a bit about my background: I left Sri Lanka (at that time Ceylon) in 1970,  with an Honours Degree in Agriculture from University of Ceylon (Peradeniya) and one year  of experience as an Assistant Lecturer in Agricultural Chemistry. Next few years were spent  doing a Master’s degree in Food Technology at the FAO International Food Technological

Training Institute in Mysore, India, a Doctorate in Food & Nutrition at Oregon State  University in USA and working as a Professor at the State University of Londrina in Brazil.

We immigrated to New Zealand in 1980, that was forty years ago. Still remember so vividly  the very first day I landed in Wellington International Airport with my husband, Conrad  Perera and our 3-year-old son Conrad Jr (Condy) who was born in Brazil. We were warmly  welcomed by Mr John Maunsell, the owner of Hansells at that time, and driven to  Masterton, where we were given a comfortable home, a vehicle and positions in his  Company as “Technical Manager” for Conrad and “Food & Nutrition Consultant” for me.

For them to hire us those days, they had to advertise three times in newspapers and prove  that there weren’t any locally qualified people to take up the positions. These formalilites  were done beforehand, and the visas were arranged after getting police and medical  clearances from Sri Lanka.

Masterton, as most of you may know, is a rural town in the heart of Wairarapa in NZ. We  made news in the local newspaper, Wairarapa Times Age (4th July 1981), under the heading, “Food is their Business” Through that newspaper write-up, the whole town got to know us.  At that time there was only one other Sri Lankan living in Masterton, who was Dr Kirthi De  Silva, (married to Ana from the Netherlands), who later became our family doctor and a  good friend.

At that time there was just one “New Zealand Sri Lanka Friendship Association” based in  Wellington, with regional representatives. In the early 80’s Conrad served as the Wairarapa  representative of that Association, which had both Sri Lankans (of all ethnic backgrounds)  and of New Zealanders as their members. They celebrated Sri Lankan events and held a  popular annual “dinner dance” enjoyed by many.

The 1983 riots in Sri Lanka had a devastating effect that created tension among some Sri  Lankans living in New Zealand. United Sri Lanka Association (USLA) was formed during that  time, with separate Wellington and Auckland Branches. Our friend Amitha Weerakoon will  cover the story of the formation of USLA in a separate article in this issue of the newspaper.

In the early 90’s Mr Amitha Weerakoon, who was a Manager of Whitcoulls at that time  became the President of the Auckland Branch of USLA. He invited me to serve on his  Committee and in the following year (1994), I succeeded as the elected President of USLA  (Auckland). I am so pleased that some of the regular events started in that year, such as  monthly Coffee afternoons and Sinhala classes for children are still continuing. The same  year we also had a combined committee meeting of the Wellington and Auckland branches

of USLA, which was held in Taumaranui, organised by late Dr Upali Manukulasuriya, who  was a founding Member and the spokesperson of USLA at that time.

In the latter part of 90’s a group of Sri Lankans representing the different ethnic sectors had  regular meetings in Auckland to discuss the possibility of uniting the community. This group  was later registered as the New Zealand Sri Lanka Foundation (NZSLF) and invited me to be

their first President. The inaugural meeting of NZSLF was held on the 15th August in 1998  and my acceptance speech that day concluded with this poem, titled, “Like Threads in a  Lace.” Since that time I have presented this poem to several audiences, such as Kiwi Merlion  Extravaganza, an event organised by the NZ High Commission in Singapore in 2002, during  which time Conrad and I were based in Singapore working for the National University of  Singapore and Fraser & Neave Foods, respectively. That same year I won a Merit Award for  this poem at the International Poetry Convention held in Florida, USA.

After spending four years in Singapore, I returned to NZ in 2004 to accept a position that  was offered to me as the Team Leader Nutrition & Health at the then Crop & Food Research  based in Palmerston North. That position became vacant suddenly due to the air crash that  killed seven scientists in 2003 while flying from Palmerston North to Christchurch. The  following year when Conrad returned, he was offered a position as a Professor of Food  Science at University of Auckland. I too moved back to Auckland to work for Fresh direct Ltd  as their Business Development and Compliance Manager. In 2010 I joined the Volunteer  Service Abroad (VSA) and was based in Tanzania initially for 2 years as Food & Nutrition  Advisor for a Government entity called Small Industries Development Organisation (SIDO).  Since then I have returned twice to Tanzania on short term voluntary assignments at the  invitation of other organisations. Wherever we went, New Zealand has been our new home  base for the last forty years.

New Zealand is home for a large population of Sri Lankans. Their diverse cultural, religious, and professional backgrounds have enriched the New Zealand society for decades. In such a  complex environment, unity is the key force that brings harmony and understanding. It was  with this vision, that the New Zealand Sri Lanka Foundation was established in 1998.

The culture, heritage and traditions of Sri Lanka have been an integral part of the lives of Sri  Lankans living in New Zealand. It is the commitment of the Foundation to establish and  maintain cultural links with Sri Lanka through acclaimed performing artists from Sri Lanka and helping the new immigrants to integrate into the New Zealand society to be of benefit  to both parties as well as contribute to charities in both countries.

I would like to commend the team who have initiated the “Sri Lanka NZ” newspaper and got  the First two Editions completed in March and June of 2020. When I was approached &  asked by Anu Weerakoon, the Media Coordinator, to write an article for the current issue, I  wondered what to write and then thought of sharing this poem and a bit of background  about myself as Past President of both United Sri Lanka Association (USLA – Auckland) and  the New Zealand Sri Lanka Foundation (NZSLF). I have worked as a Food & Nutrition  Professional in Industry, Research, University and as a Volunteer under Volunteer Service  Abroad (VSA) of NZ. I have written three books and enjoy writing poems as a hobby. I have  written some poems on food related topics, which I may share in a later issue of this  newspaper. For further information, please check: www.anneperera.co.nz

Victor – A Centenarian – One among few in NZ

A Review of Ayurveda Medicinal Value of Cannabis Sativa with a...

Here’s what you need to know about the recently announced New...

Finding my place in the land of the long white cloud...

Accept differences of others by accepting yours first/ or the best...