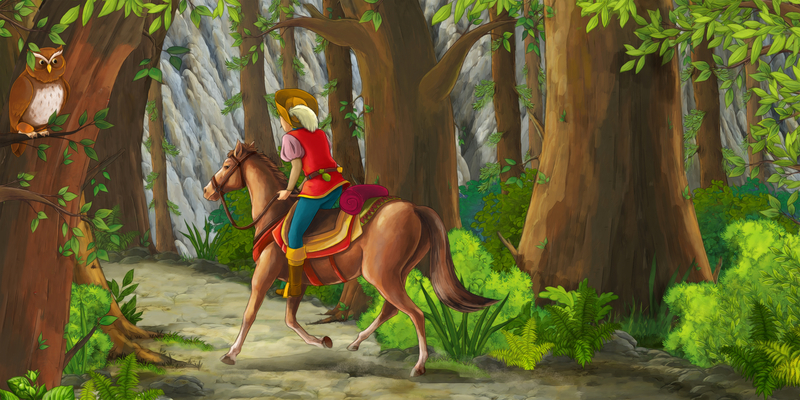 It was a beautiful cosy cottage with an arched door and two arched windows. The lace curtains which her grandmother put on to the windows were carefully restored by the occupants. Incha had a pretty little girl with silky soft fair skin. Incha called her Rosy. Rosy’s curly golden hair fell on her shoulders. One bright morning Incha went to the forest with Rosy to collect firewood. They went deep into the woods. While gathering firewood, Rosy saw a fenced garden. She went closer and peeped through the fence. There were mouth-watering sweet corns ready to be plucked.

‘Mama,’ shouted Rosy. ‘I want a sweet corn.’ Rosy begged. Incha crept in, picked sweet corn and gave it to Rosy. As she was munching the corn happily unusual thing happened. Her appearance began to change. Rosy grew smaller and smaller and suddenly turned into a gray cat. Incha took the cat to her hand and began to cry loudly. A hideous woman in a dark blue long velvet gown came to the fence.

‘Why did you steal my corn …?’ She asked in a rough voice.

‘I am sorry. I am very sorry. I didn’t know that garden is yours. My daughter-’ the woman interrupted. Incha could not complete the words. ‘Bring me a golden needle, golden thimble and some golden thread. Then I can change her,’ the woman disappeared.

Incha took the grey cat to her hands and went home weeping bitterly. She sat on the bench outside the cottage and began to cry, muttering a few words.

‘Where have you gone, My Darling Rosy?  Come back to me, my darling Rosy.’

She sang sorrowfully. A passing-by Elfish creature heard her wail and came to comfort her. Incha told him what had happened to her pretty little daughter. The animal listened to her story and began to tell his misfortune.

‘I am the Crown Prince of Serendib. I was on my way home after a wonderful hunting trip when this disaster fell on me. She transformed me into this horrible creature. She wanted a golden needle, a golden thimble and some golden thread to change my appearance.’

‘Oh… Oh… she asked me too, to bring the same things. Where to get them in this thick forest?  She is evil.’

‘Don’t say like that. We are the wrongdoers. Aren’t we?’ Said the creature. ‘I have them with me. For the past two years, I was looking for a woman to send them. I met a couple of women in the wood, but they flew away, looking at my horrible figure before I talked. Not only that, when a young girl agrees to marry me, Nanya will remove the spell.  I will be the Crown Prince again. These horrible features will vanish.’

‘I am ready to do that in this instant. Give me the stuff.’

Incha took out her scarf and wrapped them in it with great care. Put it in her cane basket and hurried towards the garden. She stood near the fence and tapped very loudly.

Nanya came wearing her blue velvet gown as usual. She had a blowpipe in her hand. Incha took out the things from the bundle and gave them to Nanya.

‘Who gave you these things?’

‘I remember…I remember.’Nanya recalled the incident. She took the golden needle, golden thimble the golden thread and put them into a little copper box. Then she took out a pouch with cowry shells and began to chant while dropping them down one by one. Then she took out the blowpipe, put some glistening powder and blew out. Tiny specks of fireballs flew out from the pipe.

‘Now go back. Squeeze out the juice from this fruit and give it to your grey cat. Your daughter will be there.’

Incha took the fruit and ran as fast as her legs would carry her. Then, she squeezed the juice from the fruit and gave it to the cat. Amazingly the little girl with golden hair appeared again. Incha jumped with joy.

‘This is your future husband. You must marry him.’

‘Marry him!’ Rosy exclaimed in a desperate voice. ‘This ugly horrible-’

‘He is the one who saved your life. After eating the corn, you were turned into a grey cat. He gave me the golden needle, golden thimble and the golden thread to give to Nanya to spare your life. Now it’s your turn to get back to his real life. The Crown Prince of Serendib.’

‘My dear Rosy give me your hand,’ the creature said.

The moment Rosy touched his hand, his horrible look disappeared. Instead, a handsome young Prince came into being. Rosy married the Prince, and they lived happily ever after in the Kingdom of Serendib.