“Thank You for being My Father” | Dr. Anne Perera 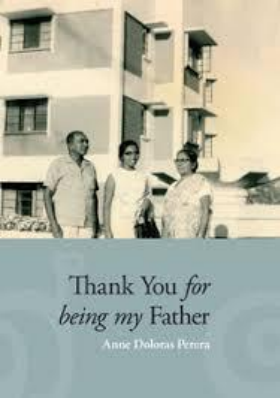 This is the title of a book that I have written as a tribute to my Step-Father,  whom I used to call “Papa”. This book is part of my autobiography, which got written after returning to NZ from my Papa’s funeral in 1984. It was inspired by a dream that I had just before his death, in which I told him, “Thank  You for being My Father”. The First Chapter of the book is titled, “The Dream”  is available on my website: www.anneperera.co.nz

My own father, “Thatha” had died on 12th February 1946, when I was around 6  months old. I do not remember him as a person, but only a photo that my  mother “Amma” had on her dressing table as I was growing up. From a young  age, Amma used to take me to the grave of my father and tell me “This is  where your Thatha was buried”. There was a cross with the name S.M. Don  Gerard. It was in the cemetery of St Mary’s Church in Egoda-Uyana,  Moratuwa. She also used to point to the sky and tell me that he is in heaven.  So I grew up thinking that my father lived with God, who, I believed, was in heaven. It gave a lot of comfort to my young heart, knowing that my father and God are together in heaven, looking after me.

After her second husband’s (my Papa’s) death, Amma spent two years with us  in New Zealand, first in Masterton (our first home in NZ) and then in Auckland.  I used to tease Amma, saying, “Now that you have two husbands in heaven, I  wonder which one will come running when you go there.” Amma returned to  Sri Lanka, and two years later, she passed away on the 12th February 1989, on

the same day, exactly 43 years after my Thatha’s death. I wondered whether  that is the way she answered my question, “ … which one will come running  when you go there?”

A friend gave me a wall plaque recently, which says, “Because someone we love  is in heaven, there is a little bit of heaven in our home.”

Dr Anne Perera comes from Moratuwa, Sri Lanka and now lives in Auckland, New  Zealand.  Having lived and worked in several countries such as New Zealand, Singapore, Brazil, Tanzania,  the USA, India and Sri Lanka, Dr Anne is truly a global citizen. She has a  BSc (Hons) in Agriculture from the University of Ceylon (Peradeniya, Sri  Lanka); MSc in Food Technology from FAO International Food  Technology Training Centre in Mysore, India; a PhD in Food &

Nutrition from Oregon State University in the USA, an Executive MBA from  Massey University in NZ and a Diploma in Counselling Psychology from Lee Community College in Singapore. She has served in the Academic, Research and Industry sectors and as a  Volunteer Food & Nutrition Advisor in Tanzania. She is interested in writing and has written  three books and several book chapters, and many poems. She can be contacted on: Mobile:  +64 212577313 email: anneperera.nz@gmail.com; website: www.anneperera.co.nz